We use cookies to track usage of our site. By using this site you agree to this use. For more information see our Privacy Policy Got It

The WMWA charity acquired the Unity House building in Stanley Road, Worcester in 2006 as it was ideally located for a new mosque. The opportunity arose, however, to purchase adjacent land which had previously been a school car park which enabled the development to include residential apartments and a sports facility for the whole community.

Traditional mosque architecture is based on minarets, domes and arches all influenced by Ottoman architecture. The brief for ONE was to break free from this traditional approach, yet adhere to the requirements of the rituals and prayers that take place.

The new, spacious design by ONE maintains Islamic principles, however, redefines how a mosque manifests itself physically. Gold cladding is used to celebrate the rituals of prayer, ablution areas are sited in double height tree lined interiors to evoke calming emotions and staircases are defined through the interplay of shadows from the geometric artwork that symbolises the infinite being of God. The form of the prayer space has been influenced by the time of day that prayers take place so that natural light floods a 7-metre-high prayer space at the appropriate times, creating an awe inspiring atmosphere within the main prayer hall.

A sustainable approach has been taken throughout the design by using natural ventilation wherever possible and low carbon energy systems such as ground source heat pumps, passive underfloor cooling, Photo Voltaics (PV) and waste water heat recovery. For example, minarets; once used for call to prayer, have been transformed within this scheme into structures that fulfil the function of natural ventilation.

The public realm has been inspired by spiritual garden design. Areas for contemplation, play and relaxation have been introduced amongst tree lined squares and water features. The public realm provides a city centre green treasure, which also provides the perfect setting for the new mosque.

An additional multi-functioning community building has been designed alongside the mosque with a large sports hall that can be used as a sports and events space. This facility will also accommodate a youth facility, a gym and a fitness studio. Car parking is behind the buildings and hidden from the street scene which will be tree-lined.

Significant site challenges included a public right of way and a culvert which dissected both of the purchased sites, however, ONE’s design overcame these challenges to achieve all of the client’s ambitions. 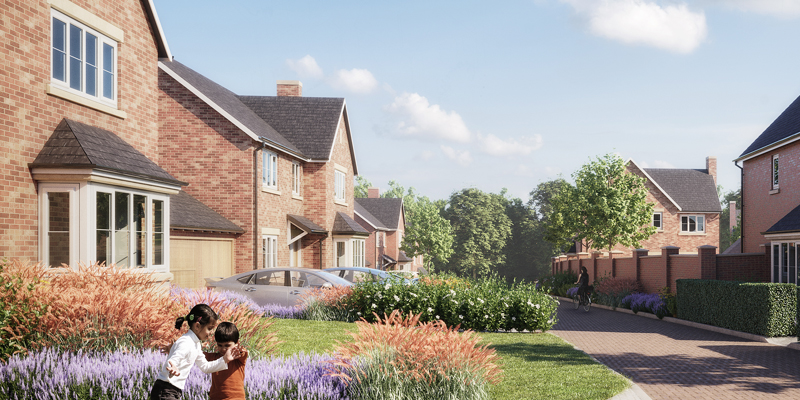 ONE Creative environments (ONE) was commissioned to provide design services for RIBA stage 3-7 for a new build residential development...

A former headquarters office block, Citation House is a Grade II listed building in the heart of Worcester city centre....

Having acquired land in Hafod Road, one of the most prestigious addresses in Hereford, IE Developments commissioned ONE Creative environments...

Barberry Droitwich Ltd employed ONE Creative environments (ONE) to act as landscape consultants over a period of 5 years, to...

Find out more
Back to Projects